This is us, a family of four from Toronto, Canada, on a year-long exploration around the world starting in September, 2014.  One part discovery, one part self discovery, and one part seeking ideas and solutions for our common future in the face of climate change and other pressures.  A “cool world” sums up our quest: to find cool things, cool people and ideas for a cooler planet. 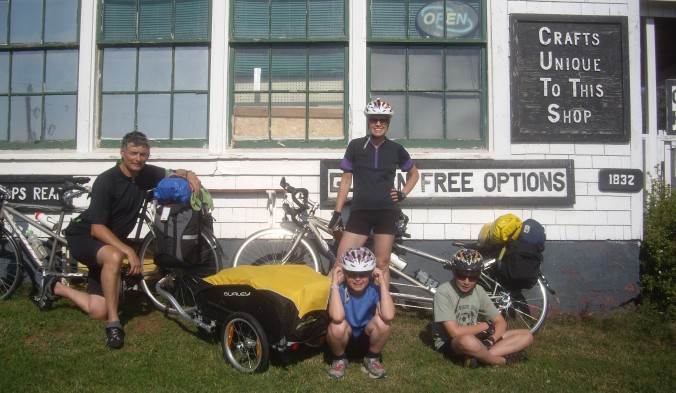 We are fortunate to live in a time when round-the-world tourism is not only possible, but commonplace.  It is a luxury past generations did not have, and future generations may not be able to afford.  Live better with less is our personal philosophy, something we try to do at home where we live in a vibrant neighbourhood.

Nancy Palardy:  Nancy is a life-long traveler and cycle tourist.  This trip was her idea and her passion over the past four years since she first proposed it.  She is a climate change policy analyst, working for a government agency in Ontario, Canada.

Chris Winter: Chris is an independent researcher with a long career in environmental charities.  His latest project, Canada Conserves, is looking into ways to help Canada shift onto a more sustainable, conserver path.  He’ll be looking for innovative ideas along the way and maybe some solutions that we can adapt and adopt in Canada.

Aran Winter:  Aran is a 13 year old with a keen interest in learning about the world, especially history (epic battles and empires), geography, and music.  His goal is to rap around the world, and find some great beaches.

Eva Winter: Eva is a 10 year old with a love of animals (especially horses) and an uncanny knack for finding neat experiences and making friends.

Both Aran and Eva will be homeschooled along the way, and they have been tasked with writing 100 things about the world as their contribution to this blog. Chris and Nancy will document the trip and our discoveries along the way.  You can click on the “Follow” link if you want to get our posts by e-mail.